No, I’m not crazy. And no, this is not about photoshopping images of situations that never happened. The fact of the matter is that while the Pope in this story is the real thing, Elvis is, ahem, not so much.

Last summer I saw quite a few homemade-looking billboards next to country roads in my area, advertising an Elvis Museum (https://www.elvismuseum.de/). Of course I was curious, and on the next of the museum’s monthly open-house dates, I drove there. 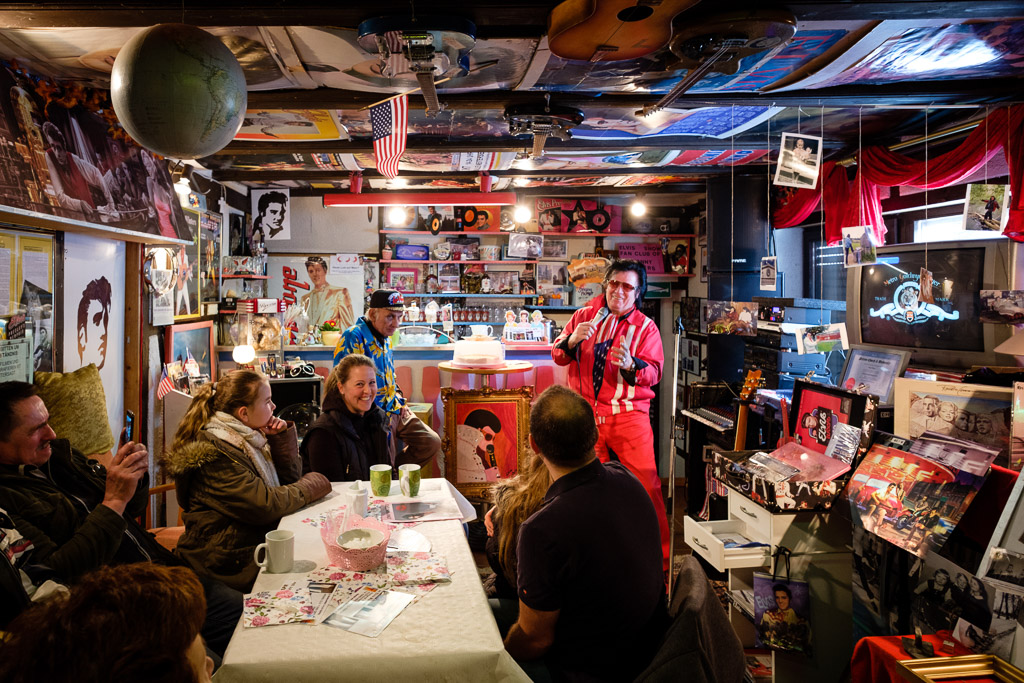 At the Elvis Museum.

As it turned out, the place is run by Jonny Winters and his wife, Irma Stanton. It is full of Elvis paraphernalia. Concert tickets, LPs, pictures, guitars, posters and even the barber’s chair from the shop where Elvis had his hair cut while he was stationed in Friedberg, Germany. Apart from showcasing items that in one way or another have to do with the life and achievements of Elvis Presley, Jonny has also been an Elvis impersonator for almost 40 years. He jokes that being Elvis keeps him from aging, as the singer never got older than 42.

Back in 1979 he was announced as Jonny Winter at a concert in Germany, as the presenter didn’t like his real name that much. He took on that name and later added the s at the end, so as not to be confused with Johnny Winter, the blues musician. 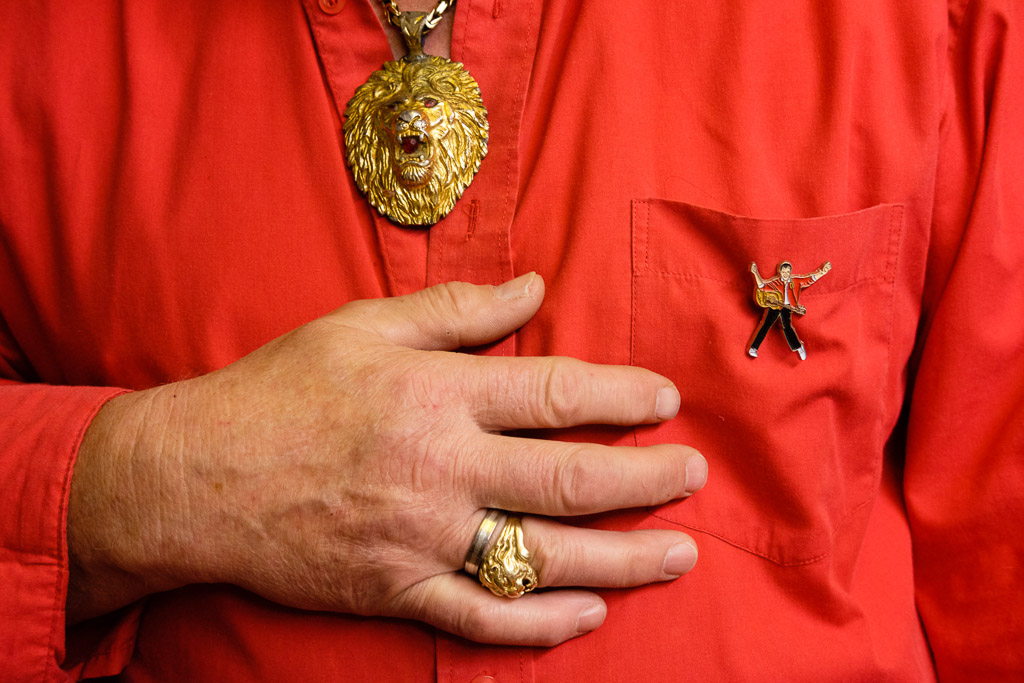 Back in 2010, Jonny had to stay in a local catholic hospital. He liked the way the doctors and the nuns treated him and proposed to show his gratitude by performing gospel songs at the hospital’s Christmas celebration. The real Elvis had been very successful in this genre. The nuns liked the idea, but eventually the Mother Superior intervened, saying she wasn’t certain if that kind of music was truly up to Christian standards. Irma, Jonny’s wife, got a little upset. She offered to record a few songs on CD and send them to the Vatican for examination.

And that's what they did. A few weeks passed, then the Vatican replied. They liked the idea, liked the music and suggested that Jonny come and play at the Pope’s General Audience in St. Peter’s Square. And that’s what he did for the first time in 2011.

Since then, Jonny and Irma have organized annual trips to Rome for fellow Elvis fans and Gospel singers. I accompanied them in mid-March of 2018.

The group consisted of 20 people, including Jonny and Irma. Most of them were friends and regular visitors to the Elvis Museum, and almost all were excellent singers. 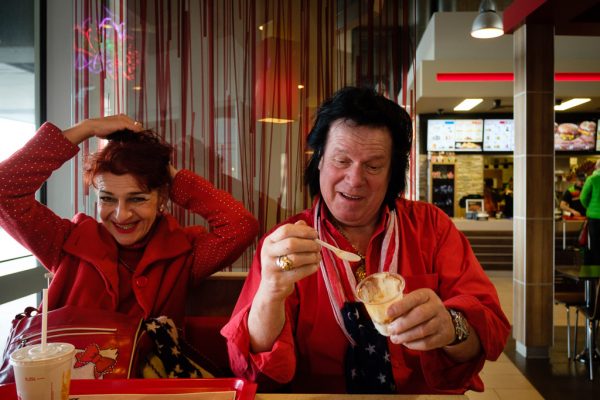 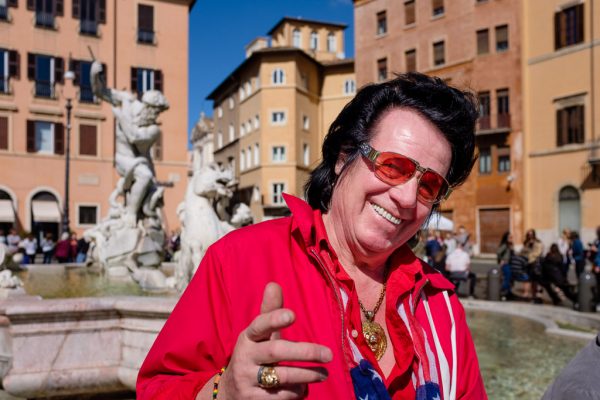 The first day was spent seeing some of the sights Rome has to offer in abundance. Walking around the city with Elvis a.k.a. Jonny, I noticed how many people looked at him curiously or even took his picture, more or less unnoticed.

The second day was the day of the Papal General Audience. Being in St. Peter’s Square in perfect weather, absolutely clear skies and a temperature around 17C (that’s about 63F for you antimetricands), surrounded by thousands from all over the world, was an experience in itself. Singing gospel songs while waiting for the Holy Father made it special. As a matter of fact, the announcer called out the group as The Gospel Singers from Kircheib, Germany. As luck would have it, Pope Francis decided to have his popemobile drive around where the group was standing, so we got very close to him. 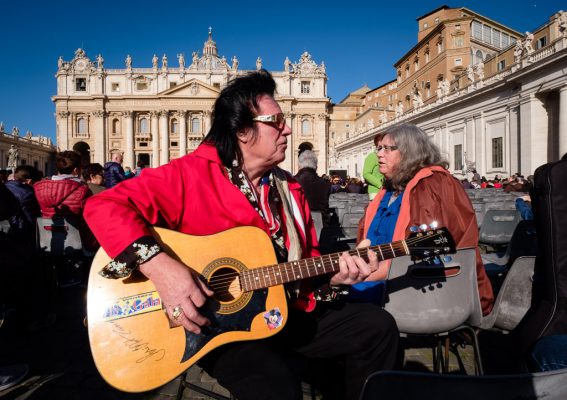 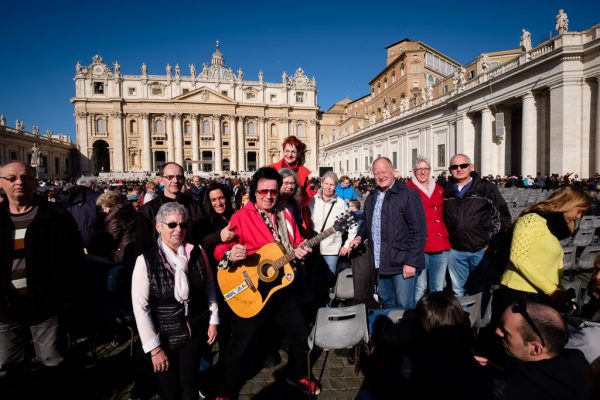 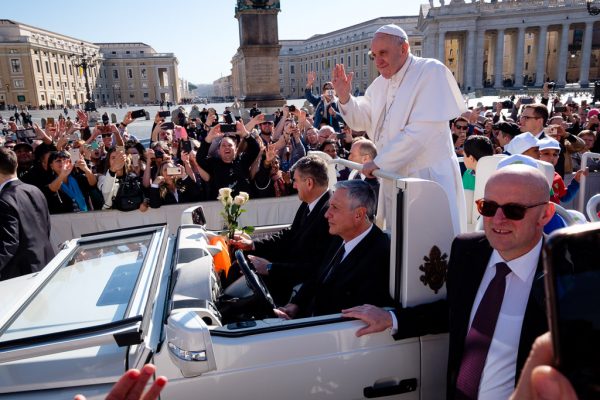 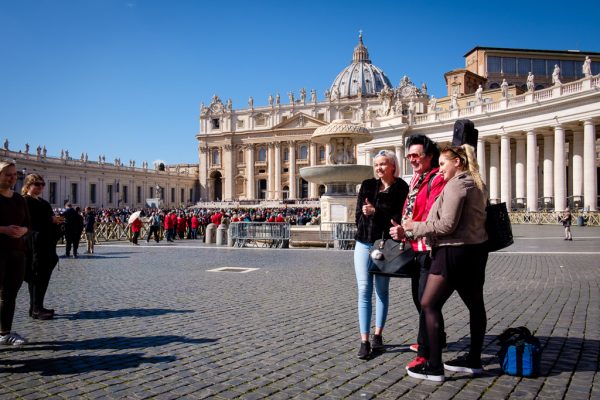 Now carrying his guitar, Jonny was approached by people wherever we went. Quite a few wanted to have their picture taken with him or asked for an autograph. Playing outside at a local bar delighted the patrons as well as the occasional nun passing by. 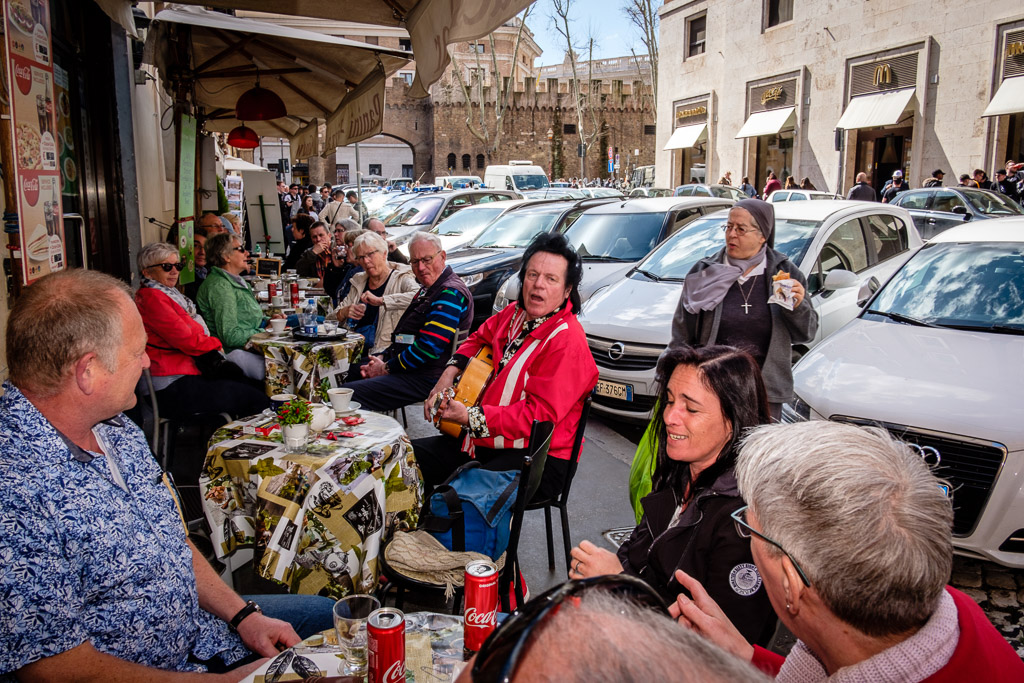 Playing outside at a bar near the Vatican.

At a coffee place at the Mercato Trionfale we ran into a waiter who was overjoyed of seeing Jonny. He had his colleagues take picture of him with Jonny on their phones and was truly happy to get an autograph. 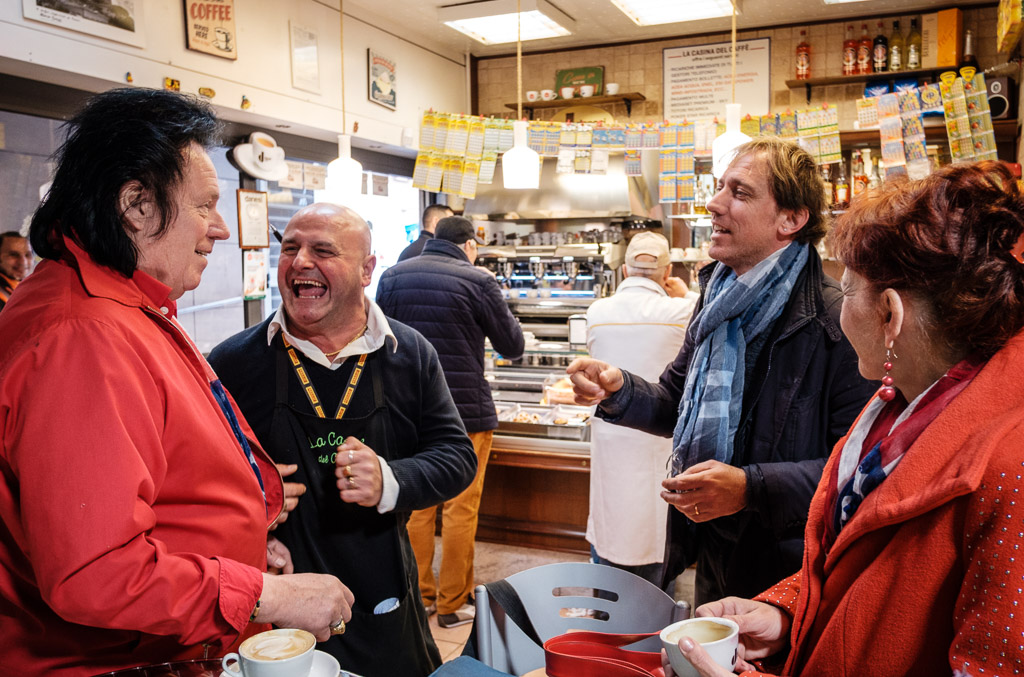 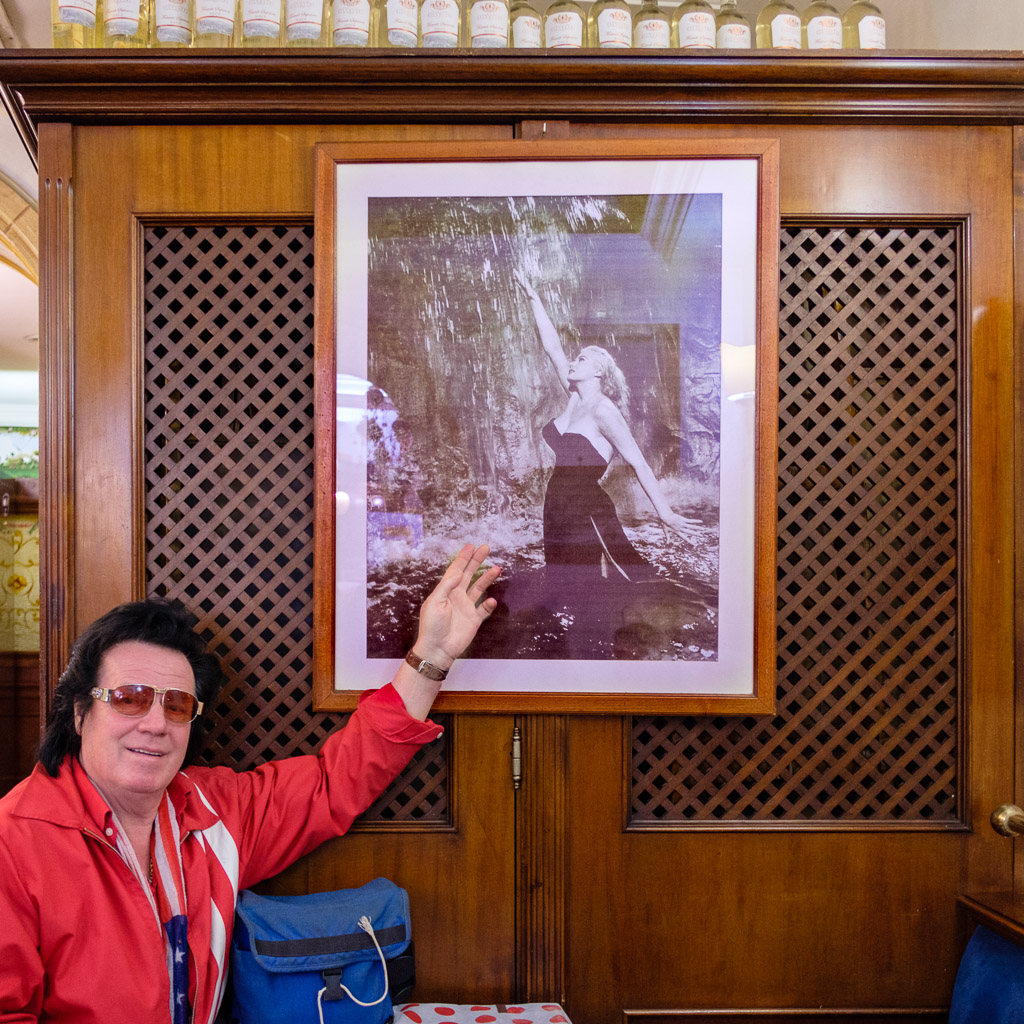 Two icons: Elvis and a poster of Anita Ekberg in a bar at the Fontana di Trevi.

We spent the rest of the day seeing some more sights and visiting the Hard Rock Cafe, which has a vest on display that belonged to the real Elvis. 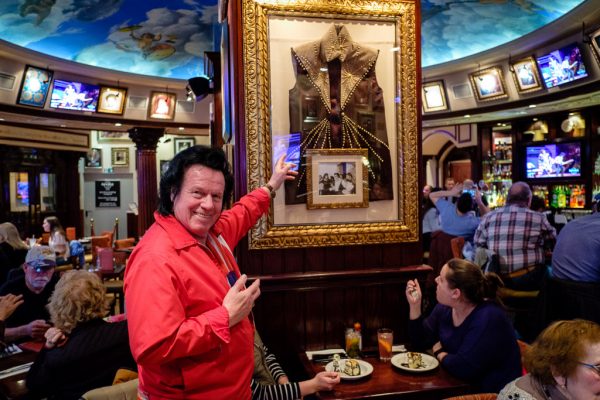 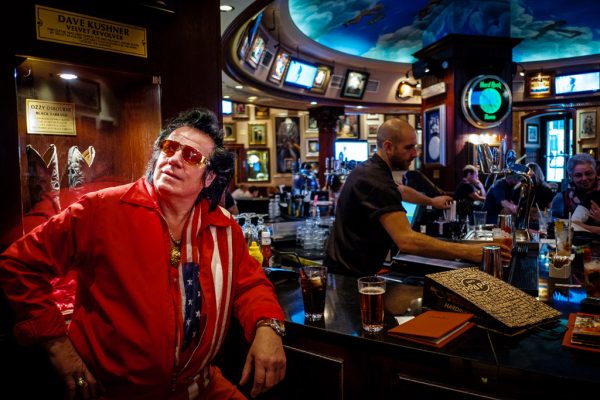 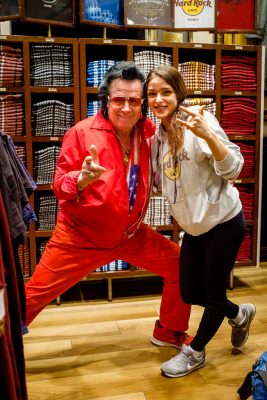 Returning to the hotel in the evening, we met a group from Messina, Sicily, by pure coincidence. They, too, were all over Elvis/Jonny, had their pictures taken and asked for specific songs. And yes, most of them sang along. When Jonny played Jailhouse Rock, nobody stayed in their seat. 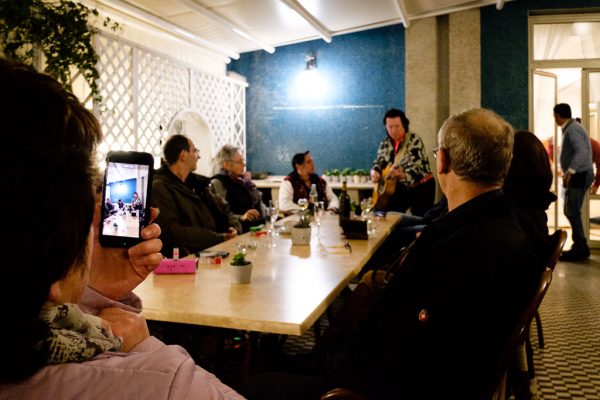 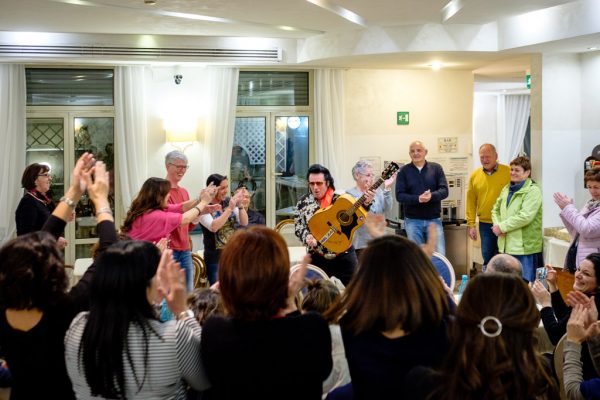 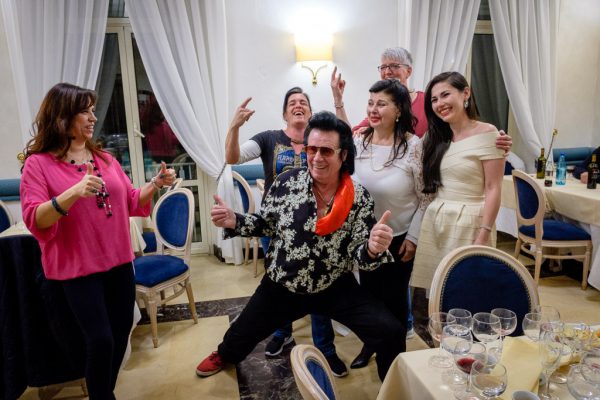 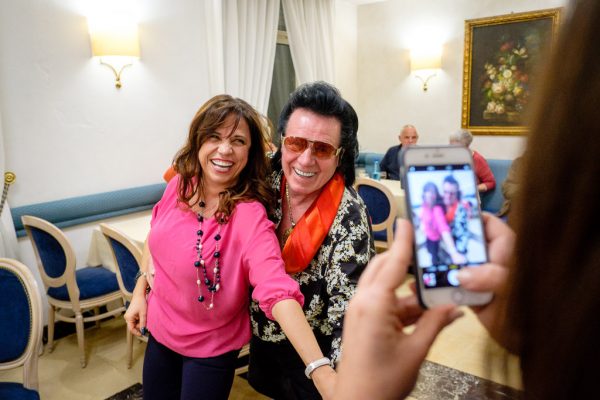 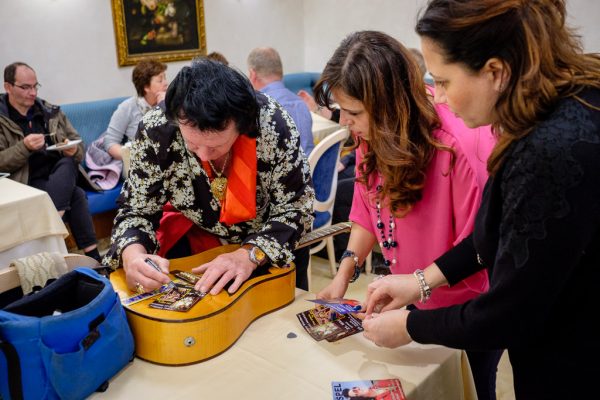 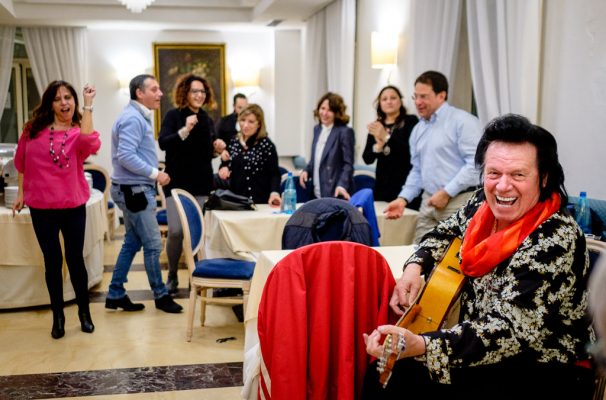 The next morning saw a few gospel songs being sung in the hotel’s lobby while waiting for transportation to the airport. It had been an exciting and exhausting week for everybody, but mainly for Jonny. 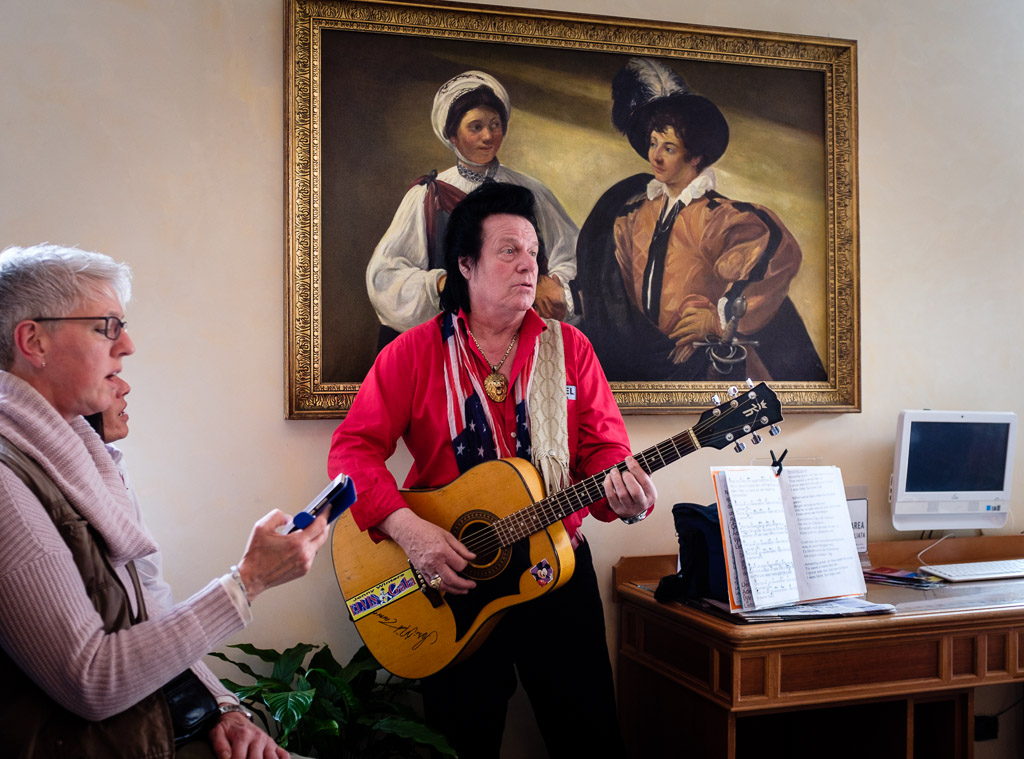 Gospel songs in the hotel's lobby. 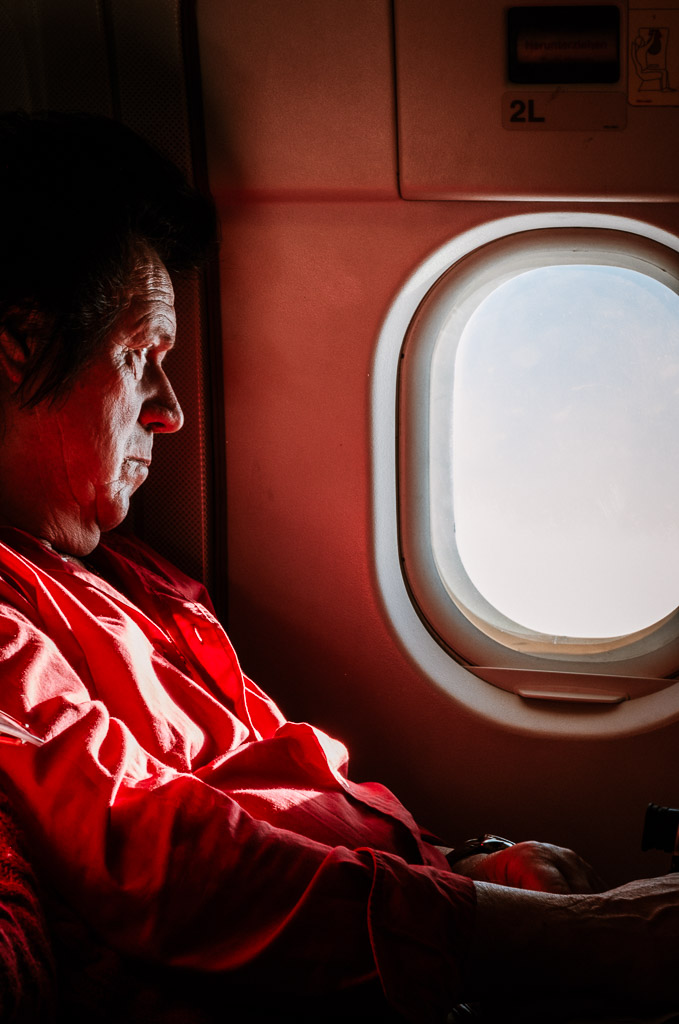 An exhausted Jonny on the flight home.

I find it incredible that Elvis Presley is still so amazingly popular more than 40 years after his death. He must have done something right.