In Montana, there are a lot of interesting people who do whatever is their thing. And there was Bernie. 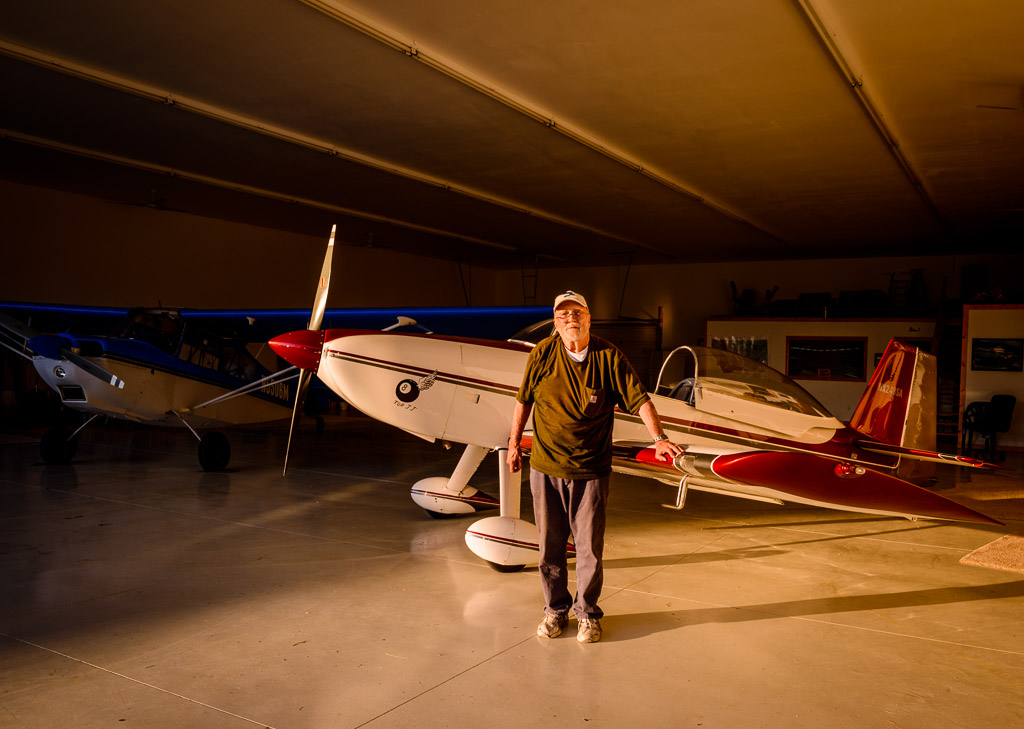 Bernie with his RV-8.

When I first visited the state of Montana almost ten years ago, I explored (among many other places) the area around Flathead Lake. In a small motel in Bigfork I saw a flyer advertising glider flights along the Mission Range of the Rocky Mountains. As I have been interesting in flying since I was a boy, I drove Ferndale, home of the airfield mentioned on said paper.

A glider was parked there among several prop planes. But nobody to be seen anywhere. I realized that this was a fly-in community with homes built right next to a grass airstrip. To me, the first home I saw was as good as any, so I walked onto its ground and tried to find someone. Right there in the hangar next to the house were two older gentlemen, working on a Piper PA-28 Turbo Arrow plane. Or at least sitting beside it and having a chat. 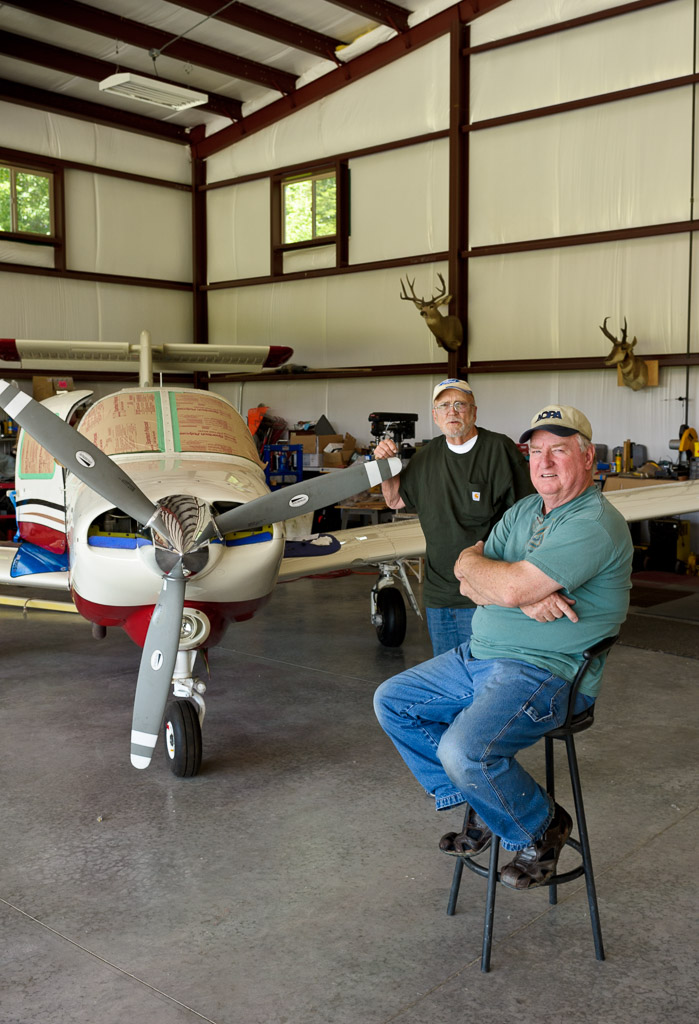 I introduced myself and asked if they knew about the glider flights. They did and called the pilot, who said he’d come by later that day.

One of the two guys in the hangar was Bernard ‘Bernie’ Gregoire who lived a few houses up the airstrip; the owner of the Piper was Charlie Hisaw. The three of us had a very nice conversation and in late afternoon I got my glider flight. Somewhat short as it had become quite late and the thermal uplift had faded. The glider pilot was sorry about that and invited me to come back the next day for a longer flight.

I did, had a great flight - and met Bernie again. As we chatted, Charlie being around again, an event planned for the next days was mentioned: the celebration of the 90th birthday of Dr. Forrest Bird, the inventor of the high-altitude oxygen regulator and various models of artificail respirators (a subject more relevant right now than anyone would want). This was to take place on Dr. Bird’s property near Lake Pend Oreille in Idaho, and Bernie thought about flying there in his RV-8 aircraft.

I asked him if he would take me along and eventually overcame his initial reluctance by offering $50 for fuel (as I learned later, Bernie had always been a businessman).

So, early in the morning of the next day, we took the RV-8 out of Bernie’s hangar and flew to Dr. Bird’s birthday party. There were lots of interesting people there, among them several astronauts who had been on Space Shuttle missions and one of the most famous aviators of all time, Bob Hoover.

On the way home, Bernie demonstrated the capabilities of the RV-8 to me. After all, this is a plane intended for aerobatics. I don’t think I’d ever had that much fun in my life before. 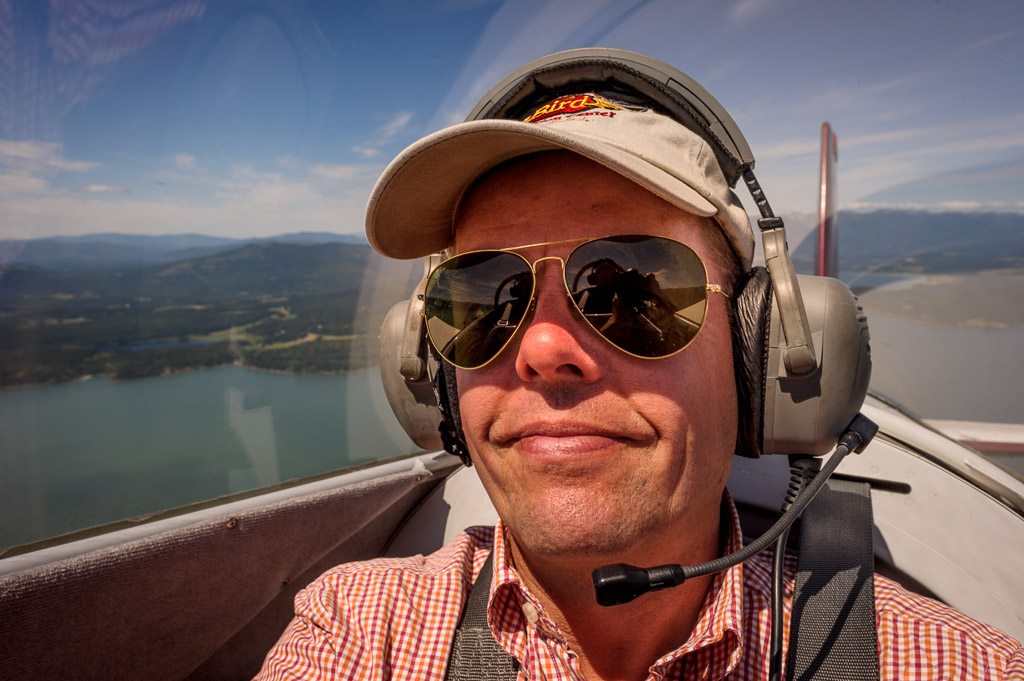 Yours truly in Bernie's RV-8 on the flight home from Dr. Bird's 90th birthday celebration.

We became friends on that special day, and when I returned to Montana a year later, I stayed at his home on the airstrip for a couple of days. It was through him that I got introduced to the local chapter of the EAA (Experimental Aircraft Association).

Together we went to see John McGinnis, who was planning to revolutionize the small aircraft industry with his Synergy, an plane designed to be super-efficient by using laminar airflow to extremes. We looked at the prototype John was building and when we left, Bernie examined the model airplane built to demonstrate Synergy’s concept. The expression on his face leaves little room for doubt that he was skeptical. 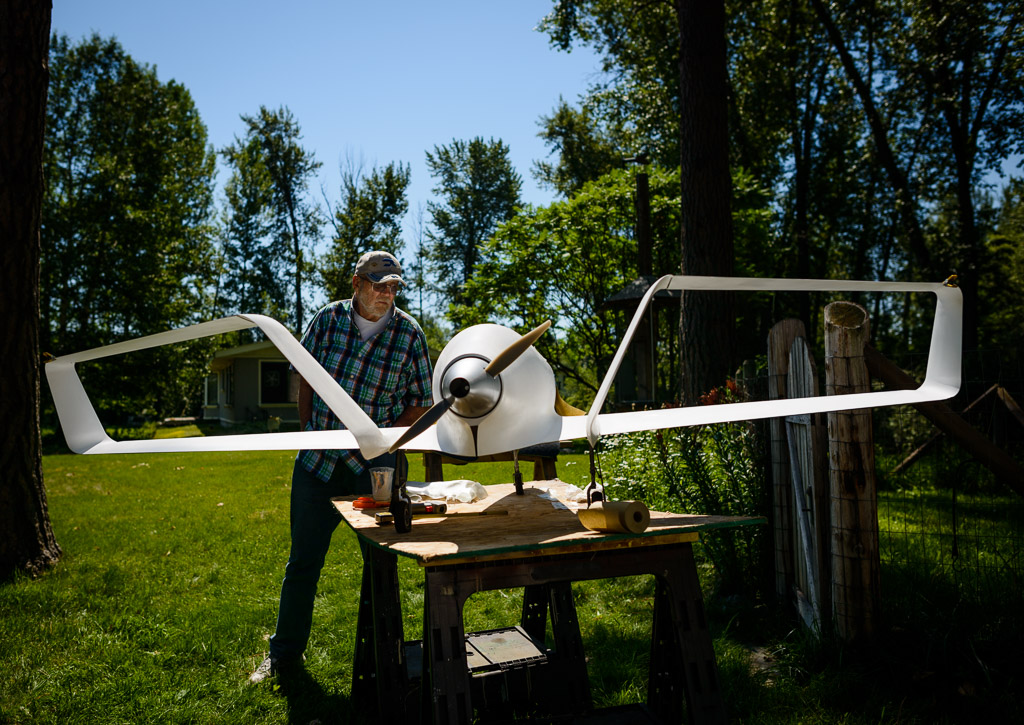 Bernie examining the radio-controlled model of the Synergy aircraft.

Bernie, who was born in 1929, had learned to fly aircraft in 1945 at the age of 16. When we met for the first time, he was 82 years old and still in perfect shape to do aerobatics. Having all kinds of airplanes over 66 years, he was not to be easily impressed.

For the next few years I visited Bernie every time I came to Montana. He seemed to really have found his place there among fellow aviators and always impressed me with his energy. When we did some aerobatics again in 2013, I was surprised that he could stand the g-forces of loopings better than I could (well, he had a lot more practice and knew the right breathing technique, I guess). 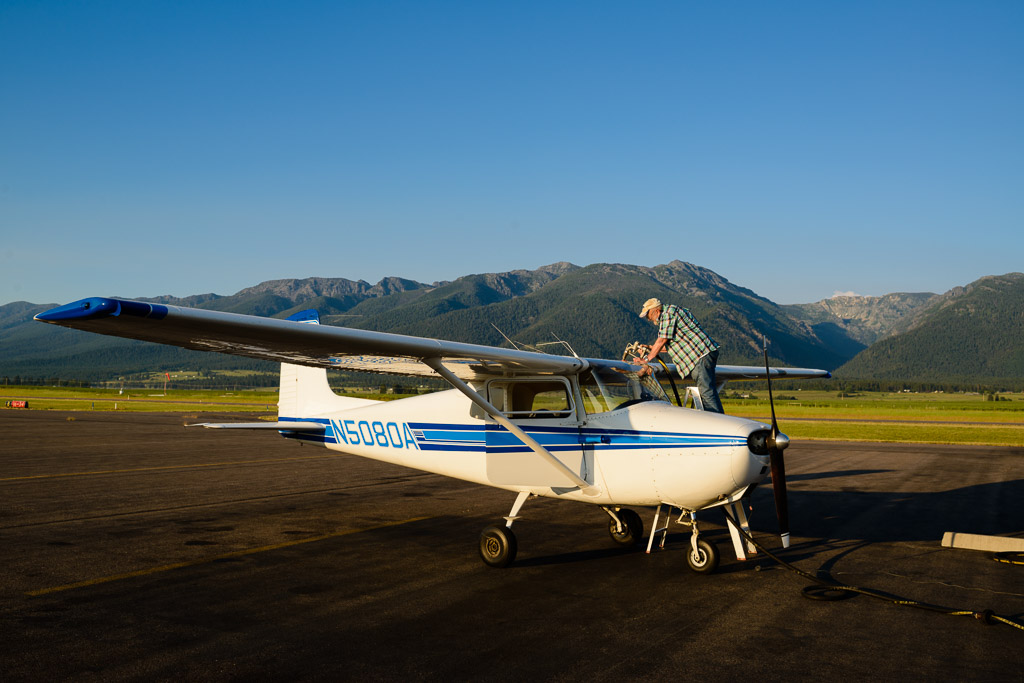 Filling up a friend's Cessna 172 that we had borrowed for taking aerial pictures.

While Bernie loved to eat well (and would accept an invitation to a nice restaurant any time), he also kept in shape by working out at least three times a week. 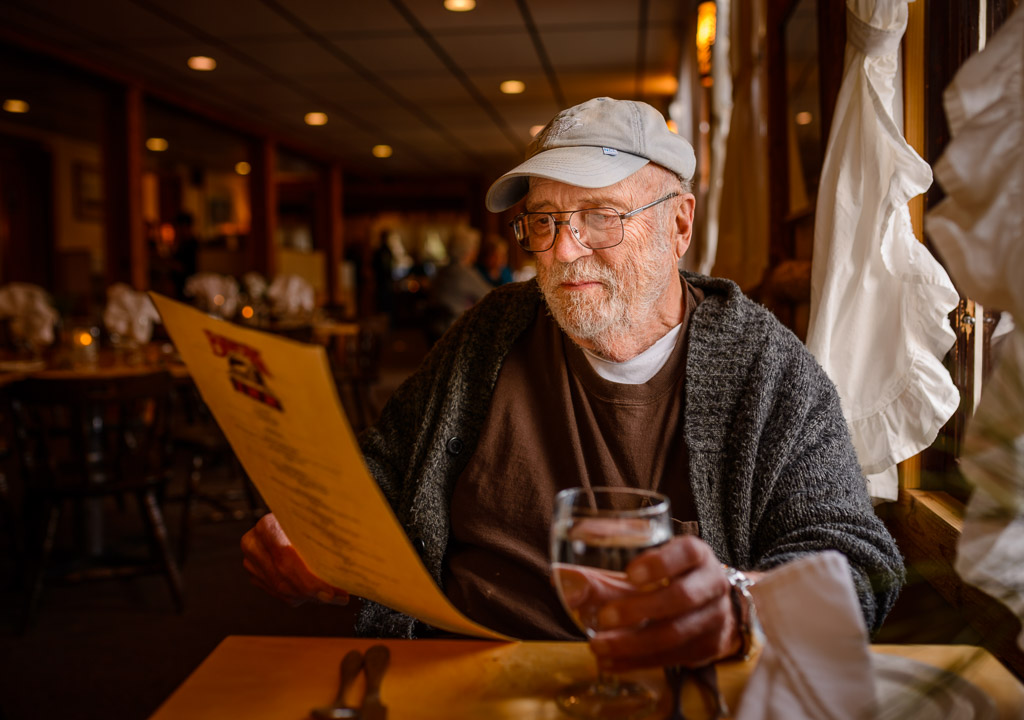 Checking the menu at the Bigfork Inn. 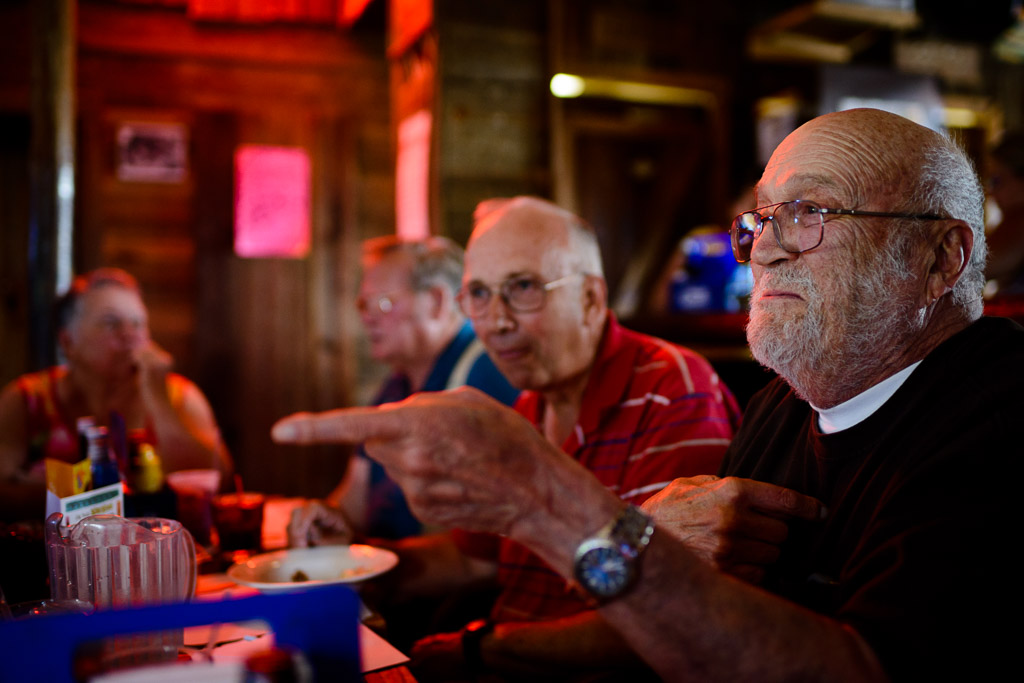 At the Junction Bar in Ferndale. 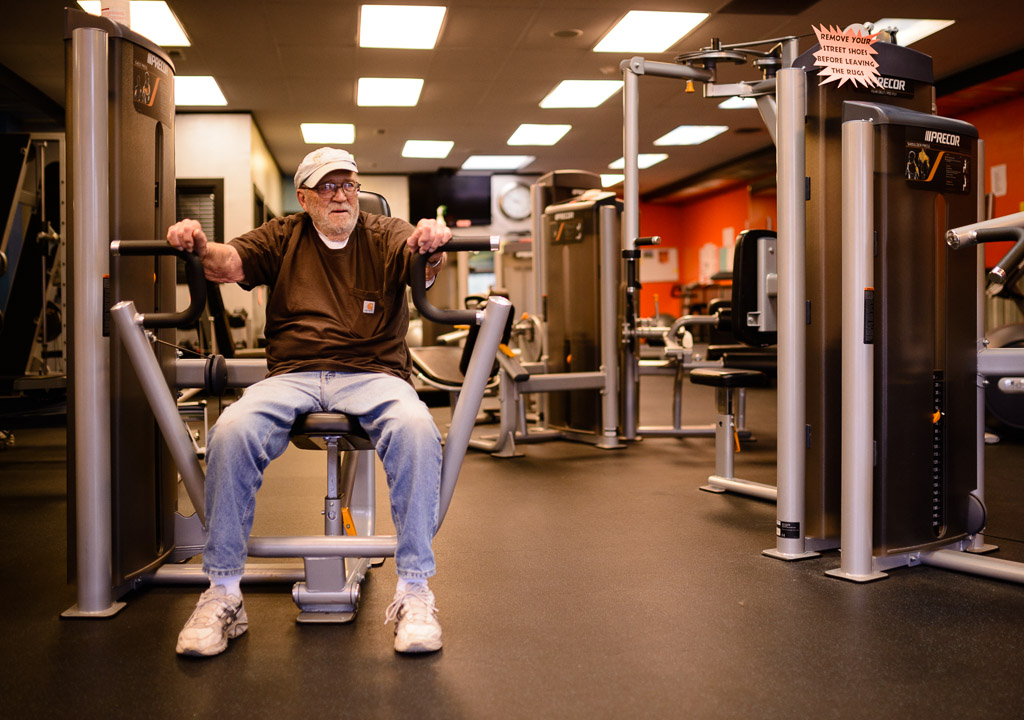 Working out at Fit24 in Ferndale.

When I returned to Montana in 2017, I learned that my friend had passed away a few days earlier after having suffered multiple strokes. He made his last flight only two weeks before he died at the age of 88. Fortunately I had arrived in time to be able to attend his memorial service, which included military honors, and to meet his three children.

Today would have been Bernie’s 92nd birthday. 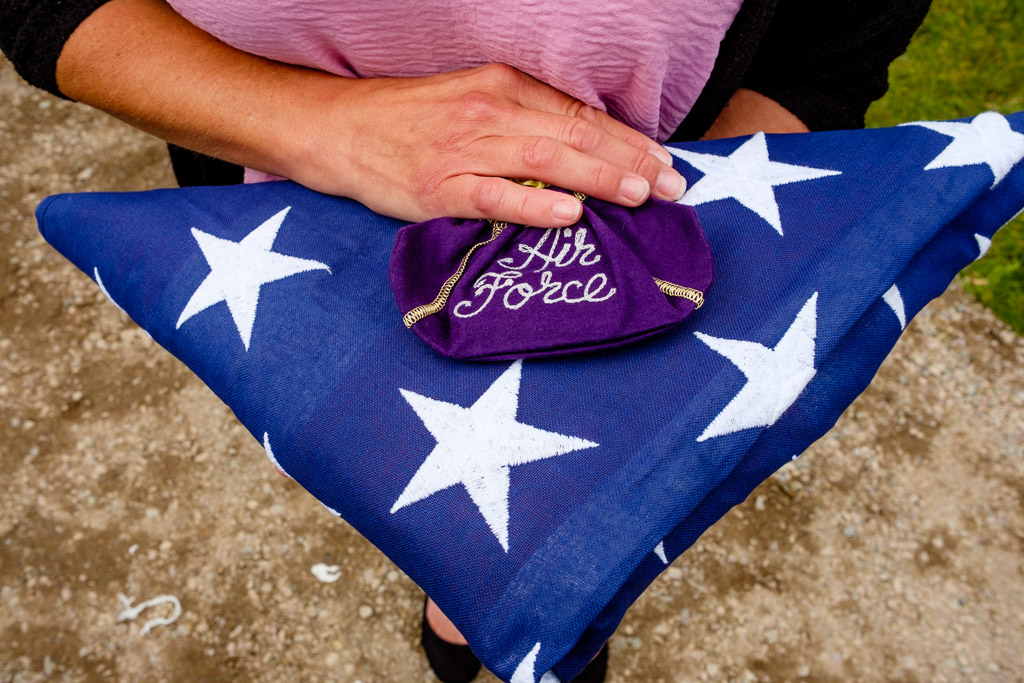