For a people photographer, planning photographic opportunities is not an easy thing. Even more so when he’s traveling and wants to convey the mood of a place. You can’t really plan whom you’re going to meet and what the situation will be like unless you start with a preconceived notion, which is exactly the opposite of what I want to do when I explore a new location. So what can be done? Let serendipity come to the rescue.

What exactly is serendipity? Here’s what Wikipedia says:

Serendipity means a "fortunate happenstance" or "pleasant surprise". It was coined by Horace Walpole in 1754. In a letter he wrote to a friend Walpole explained an unexpected discovery he had made by reference to a Persian fairy tale, The Three Princes of Serendip. The princes, he told his correspondent, were “always making discoveries, by accidents and sagacity, of things which they were not in quest of”.

While I’m unfortunately not a prince, what is described here happens to me on my travels all the time. Let me give you an example: recently, I traveled throughout Montana again in pursuit of capturing the wonderful spirit of this state (hint: there is more than one spirit…). I spent several days in Hot Springs, a quaint little town in the western part of the state which is full of interesting people. One day I tried to visit a friend who lives in the hills about 20 miles from the town. I wanted my visit to be a surprise, so I didn’t call her in advance. On the gravel road that leads to her cabin, only about 300 ft. from her gate, the right front tire of my rental car had a blowout. I walked up to her place, only to discover she was not home. Changing the tire with a whimsical scissor jack at 37°F in the rain on a muddy road was no fun. Using what is commonly called ‘the donut’, I slowly drove all the way to Polson and got new rubber on that front wheel. When all was done, it was 6 p.m. and I was back at my motel without a photograph worth talking about.

As the previous weeks of travel had been quite exhausting and I didn’t feel too energetic, I decided to give up searching for the day. I retreated to my room, started up the computer and worked on the pictures of the previous day. At some point I realized it was getting pretty cold (we’re in Montana…) and the electric heater in my room, not much bigger than a deck of cards (I am not kidding) just didn’t cut it. The solution would be to get a second blanket, so I walked over to the motel’s office. And yes, I did take my cameras because, after all, this is Hot Springs and in Hot Springs you never know.

The office was deserted, a weathered sign informing me that there would be somebody around the next morning at 8 a.m., which was no good news at all. But there was something in the air, a sound, a sound that resembled a guitar, yet it was strangely different. Following the direction of my ears, much like a dog follows its nose, led me to the porch on the motel’s street side. A gentleman was sitting there, smoking a cigar and playing what I soon would learn to be a Dobro guitar. He replied to my introduction in a strong southern drawl. As I had lived in South Carolina for a year back in the 1990s, I recognized his way of speech and told him how great it was to finally meet someone without an accent in Montana. This immediately broke the ice, of which I think there was very little to begin with, and within 30 seconds I found myself in his room, where he introduced me to his wife. It turned out they were from North Carolina (OK, slight accent) and had been travelling the American West for a few weeks. His name is Donnie ‘Dobro’ Scott, his wife’s is Barbara. He explained about the Dobro guitar (look it up on Wikipedia if you’re not familiar with it) and then the two of them performed a very romantic love song in that motel room: 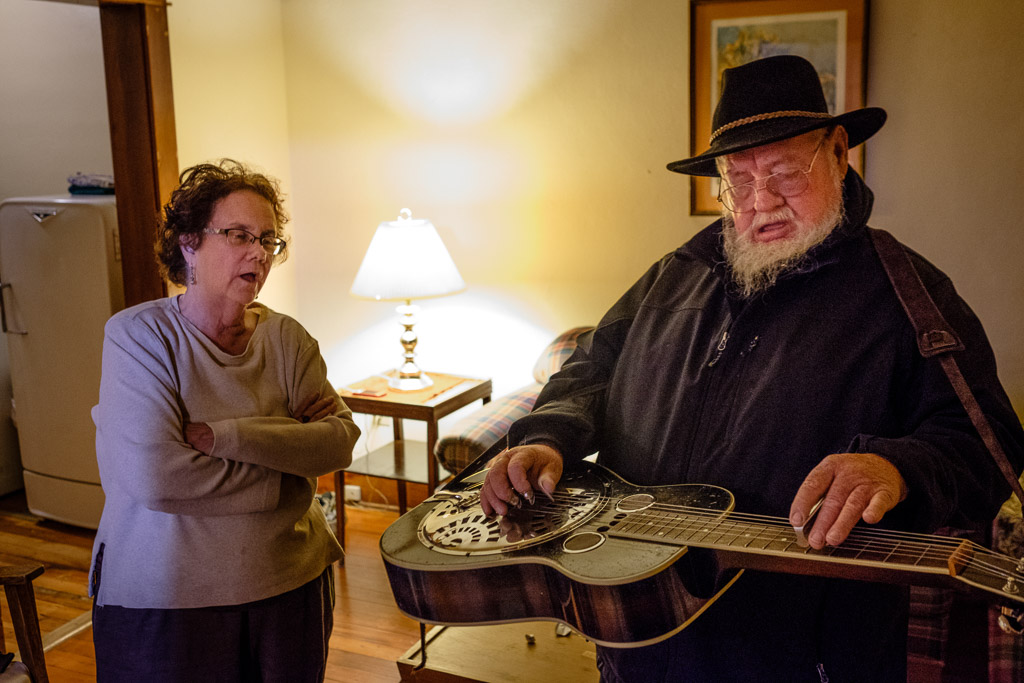 Donnie 'Dobro' Scott and his wife Barbara performing a love song in their room at Alameda's in Hot Springs, MT.

After some more conversation and some tasting of the whisky Donnie always carries on his travels, he felt it was time to return to the pleasures of smoking a cigar. That’s when I took the second photo. 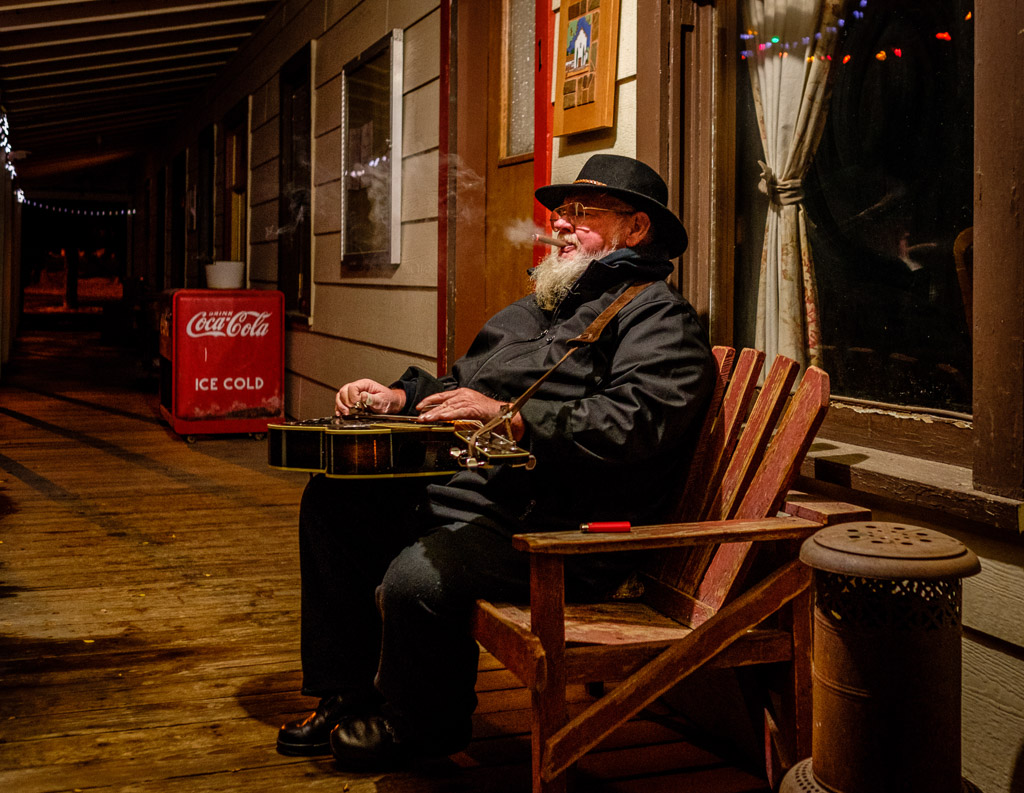 Donnie 'Dobro' Scott playing the guitar on the porch of Alameda's in Hot Springs, MT.

As happens so often, serendipity presented an opportunity that wouldn’t have come up in my dreams, let alone in any kind of planning. An open mind, an open heart and some familiarity with the tools at hand were all it took to capture this marvelous situation.

And, by the way, Barbara knew where the motel’s laundry room was, so I did eventually get that second blanket I had come for in the first place.