Conceived and built during the British Raj, India’s railway lines are still the main arteries of the country’s traffic system. In hectic, overcrowded train stations travelers fight for space inside (or even on the roof of) one of the seemingly endless trains. Photographs of Mumbai’s Church Gate Station and Kolkata’s Howrah Station are symbols of overpopulation and the collapse of transportation infrastructure. Yet India’s railway system also offers an oasis of tranquility: the Darjeeling Himalayan Railway, affectionately called ‘toy train’ because of its diminutive track width of 2 ft., running from New Jalpaiguri to Darjeeling. Today, visitors come to Darjeeling for the famous four Ts: Tibetan temples, Tenzing Norgay (the sherpa who in 1953 together with Sir Edmund Hillary was the first to climb Mt. Everest and who later lived and worked here), the world-famous tea and the toy train. 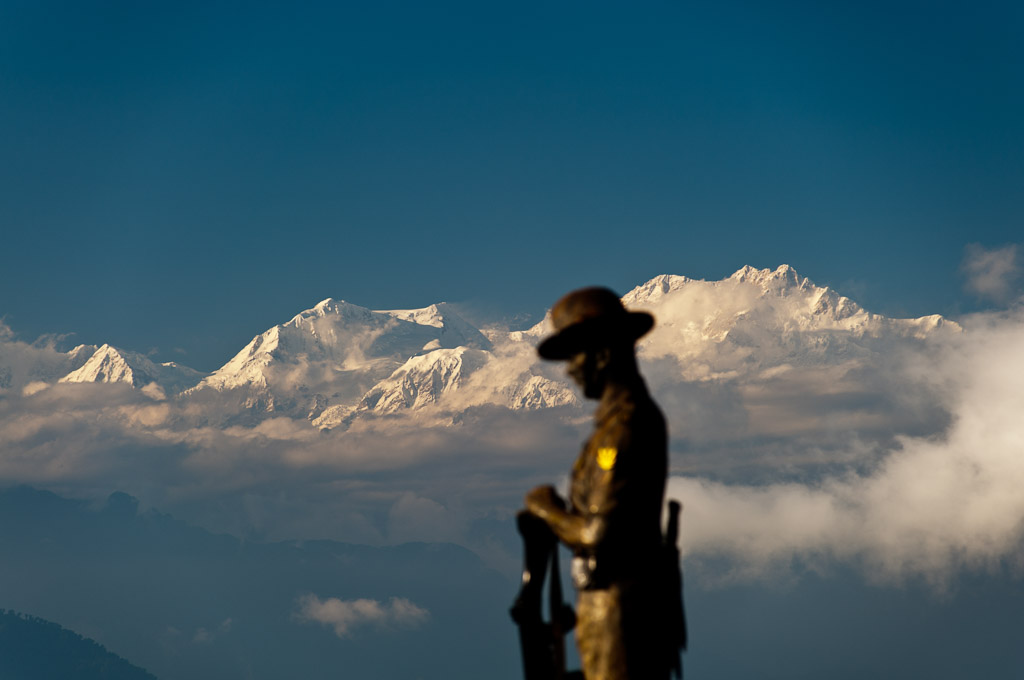 It's 5:30 a.m. in the small town of Kurseong, some 5,000 ft. up in the foothills of the Himalayas: a steam locomotive of the Darjeeling Himalayan Railway, the ‘Mountaineer’, is being prepared for the 20 mile trip to Darjeeling in the Loco Shed. The ‘Mountaineer’ was built in 1899 in Scottish Glasgow and has been chugging up the narrow tracks that link the plains of Bengal with the tea gardens of the foothills ever since. It’s cold and drizzling; some workers stand around an open coal fire in the Loco Shed, still shivering. The locomotive has already been fired up; the air is saturated with the smell of coal, steam and oil. For the trip ahead about 4,000 lbs. of coal are needed. Four workers load it into the engine’s reservoir using wicker baskets; nobody here seems to think of automation. 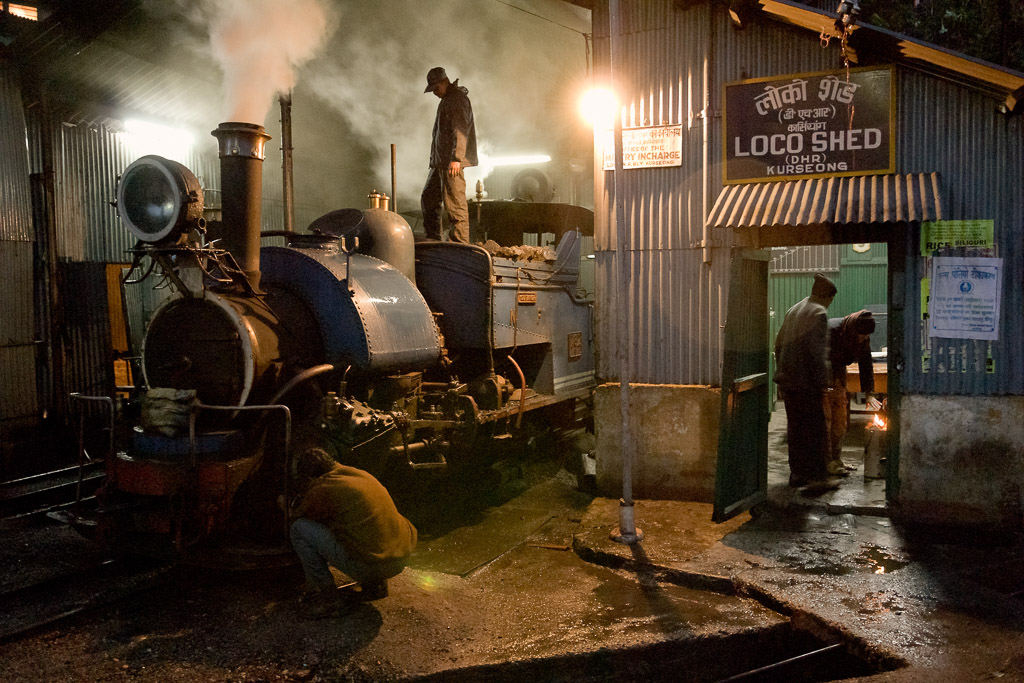 Preparing a steam engine, the 'Mountaineer', for its morning run to Darjeeling.

Some 20 minutes later: Heren T’khatri, Chief Ticketing Officer of the Darjeeling Himalayan Railway, patrols the platform and checks everybody’s tickets. The fare for the 20 mile ride in second class is ten rupees, about 20 US cents. Departure is at 6:00 a.m., right on time; according to the timetable Darjeeling will be reached in 2 ½ hours. The three tiny train cars carry an interesting mix of people: vendors who will sell their goods in the Darjeeling market, two railroad maintenance workers on their way to a repair site and, occupying the majority of the seats, young students. Along the railway there is a number of prestigious boarding schools dating back to the times of the British Raj, as their names still tell: St. Helens Convent, Goethals Memorial School, Dowhill Girls School and Victoria Boys School can be found here. The train is very popular with the students as it costs only a fraction of the bus ride.

Very slowly the train chugs through Kurseong’s ‘High Street’, passing so close to the stalls on the right-hand side that it would be easy to shoplift their wares by reaching out of the window. It’s still quiet in the streets, only at 10:00 a.m. the stores will open and the noise of the bazar will begin, not to end before late evening. The train line runs mostly parallel to the main road and crosses it frequently –there are 177 crossings altogether. At each and every one, the engine blows its whistle. Then there will be people or animals on or near the track, and the whistle will sound again. Once the train is on its way, night has ended for Kurseong’s inhabitants. In fact, people stand at roadside water taps, brushing their teeth. 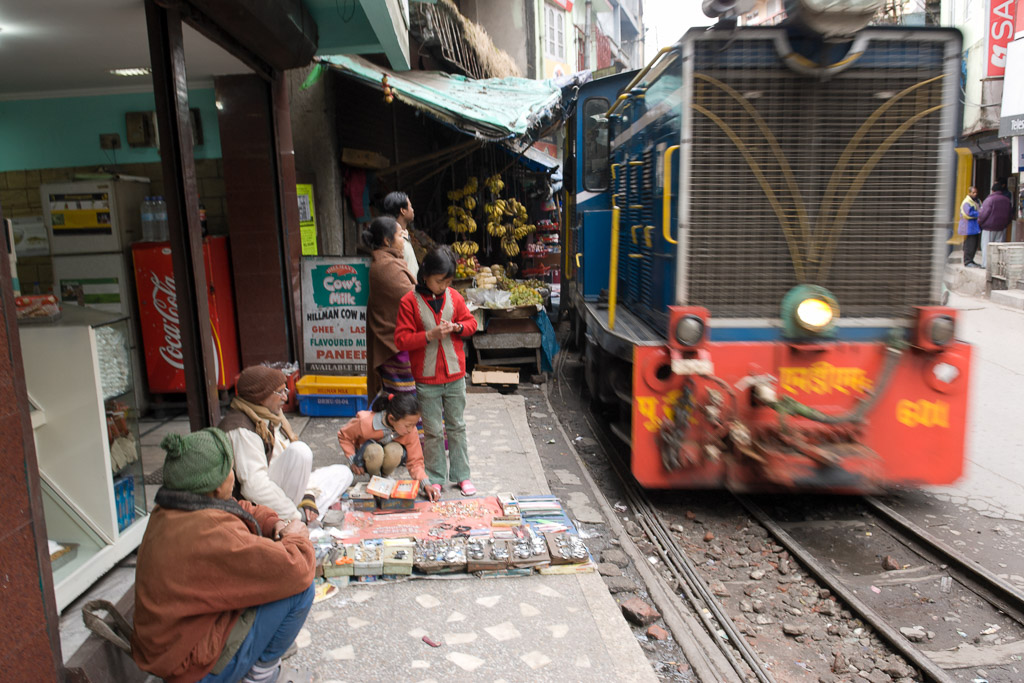 Twenty minutes later the train stops for the first time. The hardwood sleepers of the 126 year old track have to be exchanged for more durable concrete ones, the track is blocked. After only a few minutes the train starts moving again - moving very slowly, coughing loudly and bellowing soot and coal filled plumes of steam and smoke. This is hardly a clean technology. 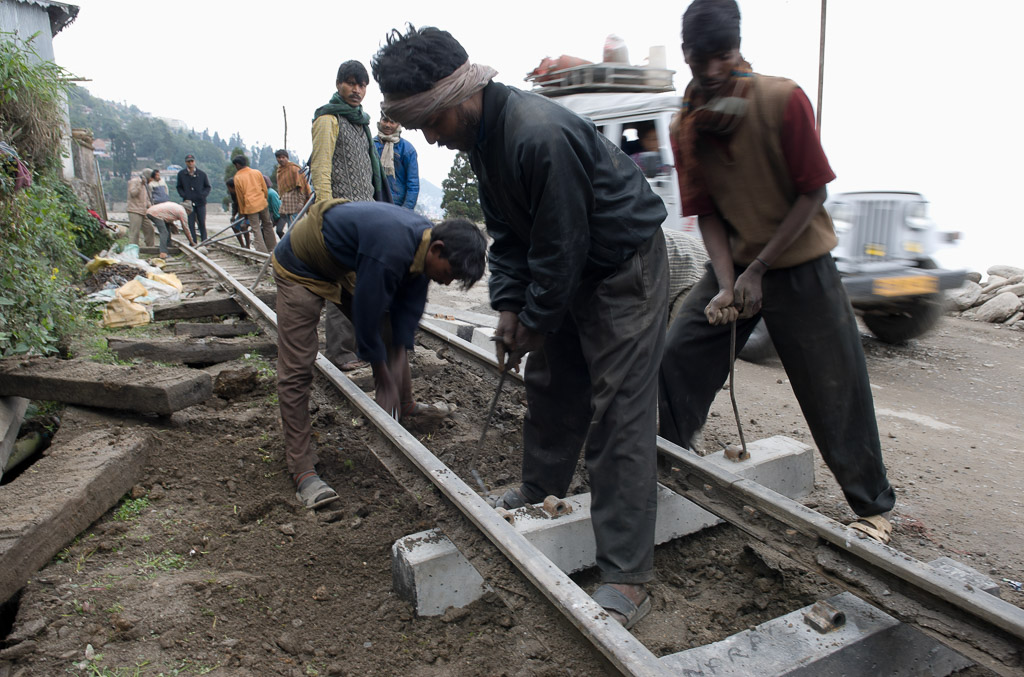 Fettlers repairing the tracks of the Darjeeling Himalayan Railway, exchanging wooden sleepers for concrete ones.

Not too long before the train has to stop again: the steam engine needs a water refill. While the tank is being filled, women from the village appear and offer hot chocolate-colored milk tea, the chai that is so popular everywhere in India, for sale. Especially the driver, the fireman and the two ‘sandmen’ who sit on the very front of the engine and drop sand onto the tracks to prevent excessive wheelslip at steep sections, are grateful customers of the invigorating early morning brew in today’s weather. 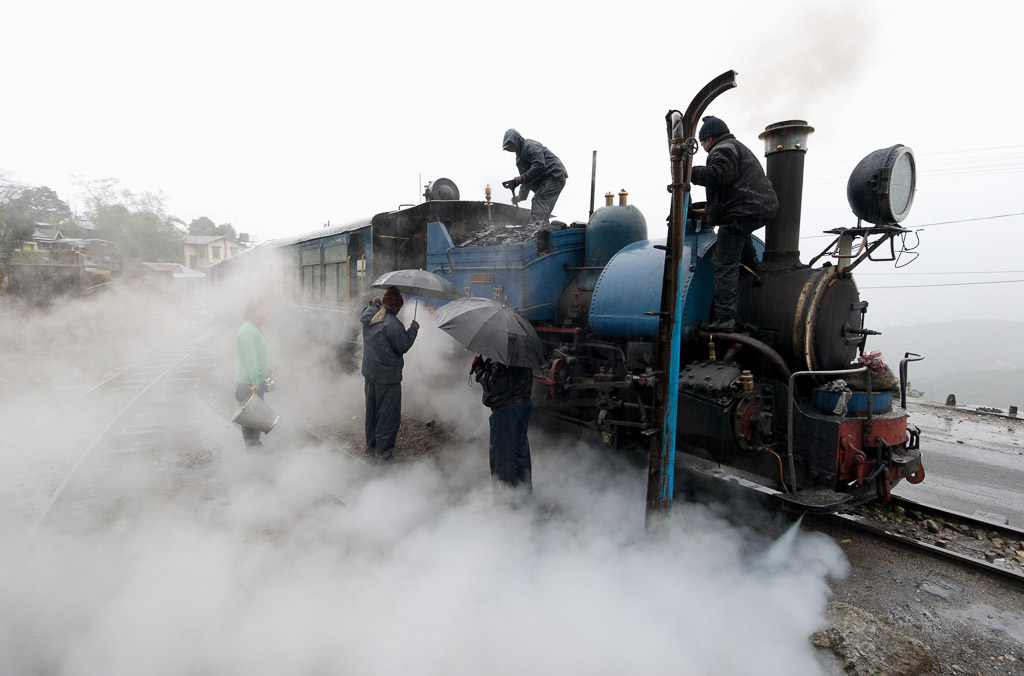 Refilling water on the Darjeeling Himalayan Railroad train on its way from Kurseong to Darjeeling.

As soon as the train resumes its run to Darjeeling, the students begin to sing in a language that most Indians will not understand: it is Nepali, the dominant language here in the hills. A few miles later the clouds lift. On one side of the tracks the lowlands of Bangladesh come into view, on the other majestic Kangchenjunga, at 28,169 ft. the third-highest peak on earth, presents itself in the morning light. The Nepali song, the rhythm of the engine and the impression of being halfway between heaven and earth combine for an almost surreal experience. 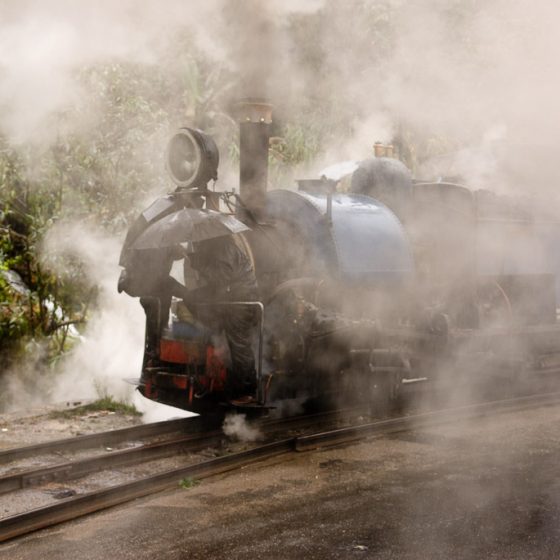 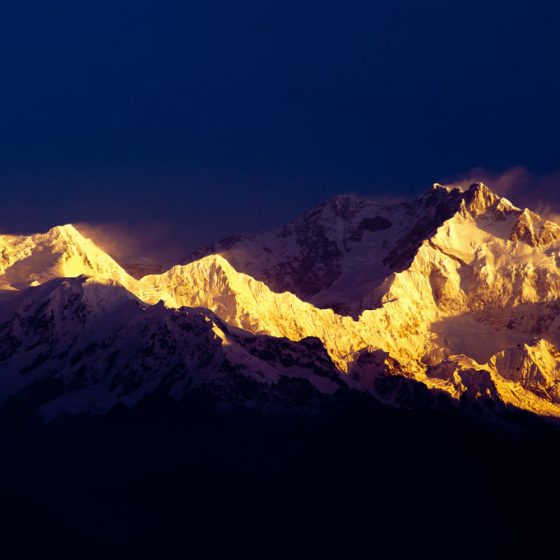 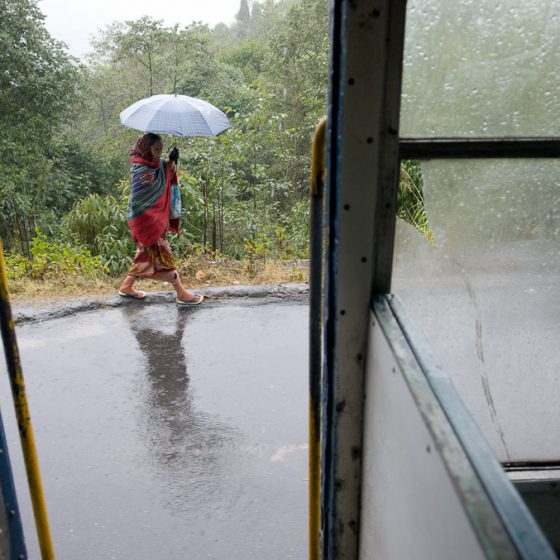 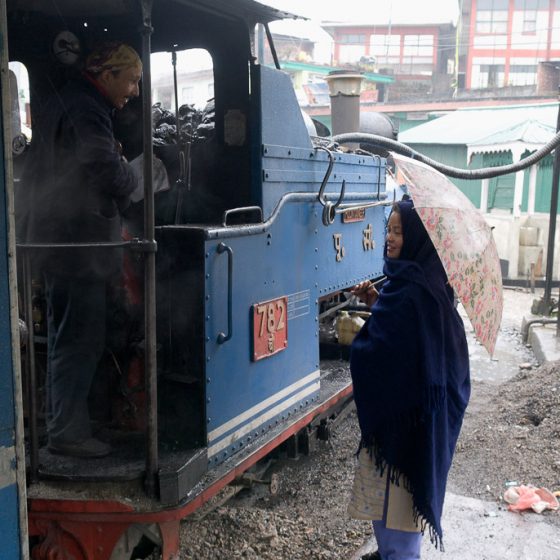 At the steeper sections the train moves so slowly that it’s easy to hop off, walk alongside for a while and hop back on again. After more than 1 ½ hours only half of the distance has been covered and the train reaches the station of Sonada. Twenty minutes later it still hasn’t moved. Passengers become restless, some get off and continue with one of the many shared taxis. Someone asks the station manager for the reason of the delay: a landslide, caused by the heavy rains of the previous day, has blocked the tracks ahead. Nobody knows if they can be cleared today. The fireman keeps the engine on operating temperature, but of course he also doesn’t know when or even if the train can continue. The station manager calls the Darjeeling station over and over again, passengers ask policemen, who are equipped with two-way radios and should have real-time information on the progress of clearing the landslide, about the situation. One statement contradicts another: as soon as someone says the track has been cleared, another source claims the track won’t be usable before late evening. Meanwhile the first shared taxis return with the passengers who had left the stranded train earlier, now reporting that automobiles can’t pass the landslide, either.

The engineer of the locomotive takes it easy, warms himself on the boiler and exchanges the latest gossip with passers-by. Some boys collect small pieces of coal that have fallen from the engine. Delays like this are a fact of life on the Darjeeling Himalayan Railway; nothing to worry about, the train will start moving again a little later. But today the odds are against making it to Darjeeling. Two hours after the train arrived at Sonada the station manager declares that it will return to Kurseong. The return trip takes about as long as the journey uphill; altogether the train took more than six hours to cover 10 miles towards Darjeeling and back. The passengers who have to go to Darjeeling have no other choice but to spend another night in Kurseong and try again. For some it is an unpleasant interruption of their journey, for others, the chance to experience a fascinating part of railway history one more time.

At the time of the raj, the British rule in India, hill stations were popular destinations to get away from the heat and the threat of malaria during the summer months. Not at all of them were easily accesible, though: the journey from Calcutta to Darjeeling took three days and involved trains, bullock carts and steam ferries. To improve this situation and to facilitate the trans­portation of the world-famous tea from the area, the government of British India decided in 1879 after brief deliberations to build a railway line connecting Darjeeling to Siliguri, 50 miles away and 6,600 ft. below. To save cost the line would not include tunnels, which meant that it would have to hug the terrain, necessitating steep climbs and very tight turns. Only a narrow gauge could be used and a width of 2 ft. was chosen. This narrow gauge invariably led to small-size rolling stock, giving rise to the moniker ‘toy train’. Operations started in September 1881.

Climbing up the Himalayan foothills in the toy train, a journey scheduled to take 6 ½ hours, but in reality usually closer to 10, evokes the feeling of that bygone era. The first part of the line leads through thick rainforest with beautiful sights of bougainvillea and orchids. Soon the track begins to slope upwards at a gradient of 1 in 20. At some sections it is even steeper; this is where loops and Z-type switchbacks were put into place. After a short climb the scenery changes again: now the train runs through tea plantations dotted with trees that provide shade for the delicate plants. In Tindharia the train passes the main depot and the workshop of the Darjeeling Himalayan Railway; this is where the old locomotives and cars are lovingly maintained. With the appropriate permit (available for a small fee) tourists can visit the workshop and get a notion of how much work is involved in keeping a 100+ year-old steam engine in shape. Even today most of the passenger trains are pulled by steam engines; the more modern Diesel engines are mainly used for freight trains. In 1999 the Darjeeling Himalayan Railway became a UNESCO World Heritage Site.

Kurseong is the most significant town along the line and offers spectacular views: on one side of the train the view extends to the plains of Bangladesh, on the other side the peaks of the Himalayas come into view. In clear weather the third-tallest peak on earth, Kangchenjunga (28,169 ft.) can be seen from here. From Kurseong the train takes another two hours (if all goes well) to the highest point on the line, Ghoom. At 7,400 ft. this is the highest station in India and one of the highest in the world; only in the Andes of South America some stations are at higher altitudes. Ghoom is home to several very interesting Tibetan monateries, among them Samten Choling Monastery and Yiga Choling Monastery. The monks speak English and show visitors around the premises if their time permits.

From Ghoom the train slowly descends the last 5 miles into Darjeeling.The last section of the line extending from the passenger station into the bazar is no longer in use. The home of Tenzing Norgay, who climbed Mt. Everest together with Edmund Hillary on May 29, 1953 is on a hillside, a good kilometer before the station. Darjeeling's most famous sherpa later directed training at the Himalayan Mountaineering Institute (HMI) established by the Indian government in 1954. Located next to Darjeeling's beautiful zoo, HMI with its museum, showcasing equipment of many Mt. Everest expeditions, is well worth a visit, even more than a half century after the first ascent - a major world event in its day. 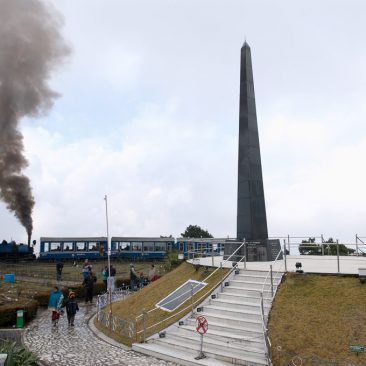 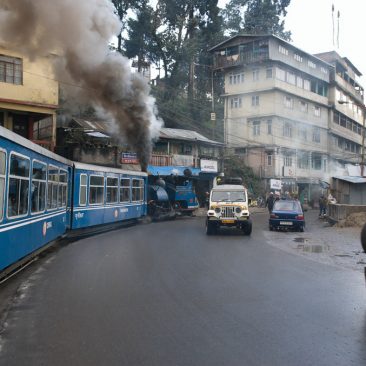 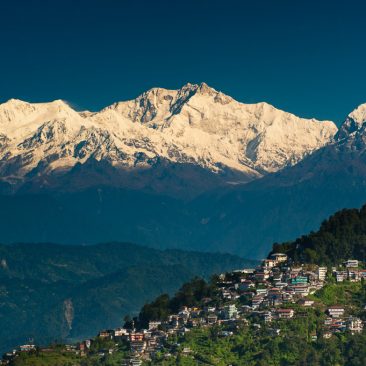 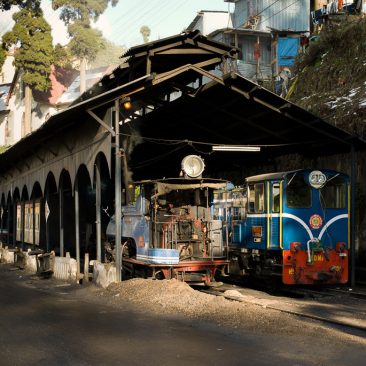 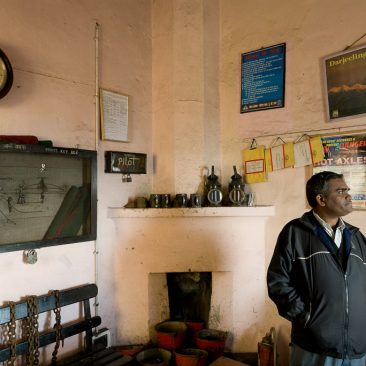 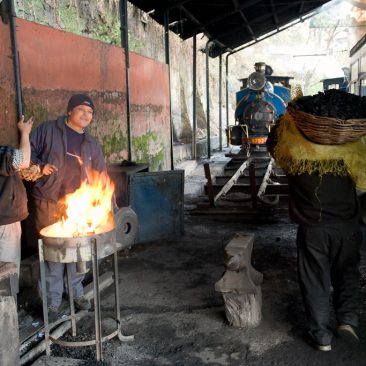 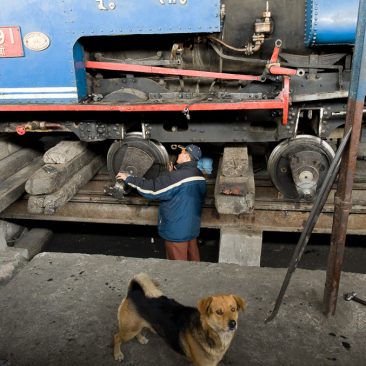 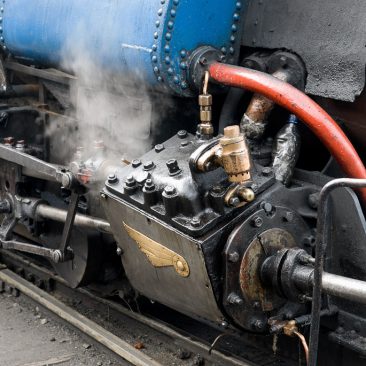 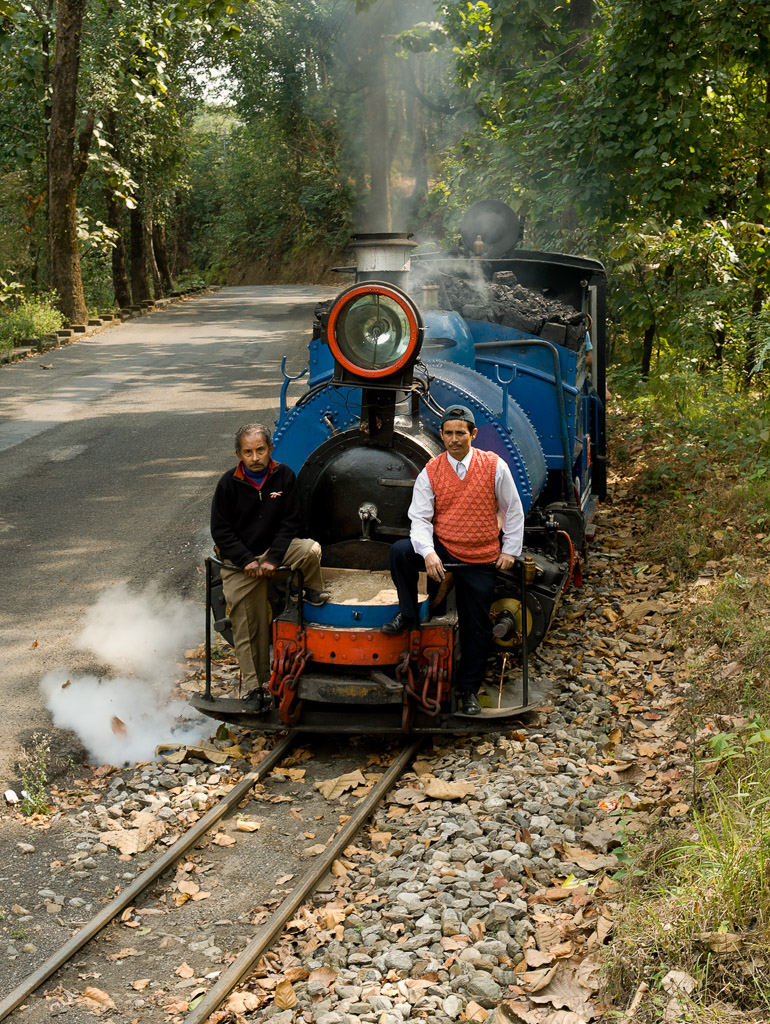 Two helpers at the front of the engine drop sand onto the tracks on steep sections to improve traction.